For years I told myself that while I could probably write that novel I would never be able to think up any ideas. I loved writing, I loved blogging, I was good at it – but fiction? That just seemed a scary step too far. In the end a conversation with a friend finally pushed me down the path to fulfilling my life-long dream. I applied for and was accepted onto a novel writing course. So now I had to do something. I was obliged to – I was paying for it!

I still didn’t have any inspiration though. I initially had a very vague idea about a woman who gets away with murdering her husband – or at least tries to. Maybe I’d had a row with mine, who knows. But it warped as I was writing it into an entirely different and really quite strange magical realism novel. And it just wasn’t working, magic or murder. Then one morning I was walking to my class, which was based in Bloomsbury, heart of literary London, when it happened. Inspiration. It just fell into my head like a stone being dropped into a well, an initial splash followed by ripples of other ideas, of characters, dialogue, of everything.

It was fairly simple as ideas go – I just thought, what would happen if someone deliberately set out to infiltrate a family unit for their own nefarious purposes? How might they do it? I just had an image of two women, a mother and a daughter, and someone other who sought to come between them. As I began to write it occurred to me – why on earth would someone want to come between these two? Could they, perchance, deserve it? Secrets and lies and revenge – a rich soil for any narrative to take root in. It was at that point that one of my characters took over and dragged me down a much darker path than I’d anticipated.

I was drawn to depicting a mother daughter relationship because there’s all this expectation heaped upon it: closeness, trust, protective instincts. There is so much scope for drama – all those things becoming twisted and toxic. It’s always struck me as a very fine line, the space between loving and hating someone. No one is more infuriating than the person you love the most, no one has the ability to disappoint or hurt you more than someone who has your heart in whatever capacity you’ve given it to them. I found a lot of inspiration in the relationships people have with each other, how much they give, and how much they hold back.

I was surprised to see some of my own experiences colouring the novel, how I pulled further inspiration from things that I loved, or things that have happened to me, and wove them in. My sister is an artist, and so is the mother in my novel. I have always admired the creation of something from within, words and pictures, and I loved writing about the artistic process, sadly lacking as I am in that particular talent myself. There’s a lot of inspiration to be found in small things that people do and say and mean.

There was another place that I found inspiration, where I continue to find it, and that’s from other people’s writing. One source is the friends I’ve made along the road. In our writing class we would take turns to hand over 2000 words that we’d sweated and fretted over for critique. Terrifying as that was, it was also incredibly inspiring. Intelligent readers ask you questions that make you really think about what it is you’re writing and what you’re trying to say. Not only that but doing the same for others – helping someone solve a tricky plot point seems to unlock the ability to solve your own. I would recommend anyone to find a circle of people who want to do the same thing you do and enjoy the inspiration you find there. It’s just as easy to learn from other people’s mistakes as it is your own – and it’s just plain lovely to rejoice in their successes too.

Then there’s the wealth of books already out there in the world from the people who have gone before you. Reading has always been my favourite pastime; I don’t remember a time when I didn’t love to get completely absorbed in a story. My family know there’s no point in trying to ask me something when I have my nose in a book. Writing psychological suspense made me appreciate other authors who had done the same. Their books also taught me the tricks of the trade as it were, the sleight of hand, the duplicitous characters, the unreliable narrators. There’s so much inspiration to be found in reading. I can think of half a dozen authors I’d love to be when I grow up.

A friend found it interesting that I found inspiration whilst walking – whilst I wasn’t doing anything except moving and breathing. Wisely, she said that the only prerequisite for finding inspiration is being open to it and making space for it to happen – not trying to force it. Funnily enough, she found the inspiration for her wonderful novel while walking too.

Writing this novel showed me that inspiration comes from everywhere and from everything. It comes out of memories and experiences but also from questions. When you ask questions, you get answers, and I hadn’t realised that before. I thought that authors just came up with these fully fledged ideas and then sculpted them into these great monoliths of literature. I didn’t realise that novels can unfurl from the tiniest seeds, the smallest questions, what if this happened, what if that did. That’s how it happened for me. I just asked a question.

I have a new desk. I am delighted. This means I *have* to keep writing, right?!
Everyone follow @iggy_themainecoon he lovely 🥰🥰🥰
I love this picture. Five years ago! What a dink 🥰
Nothing as lovely as the sound of the sea. Such a lovely weekend spent in Norfolk, take me back! 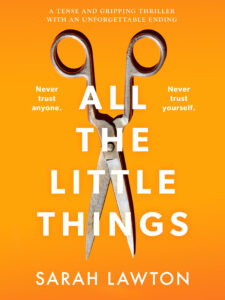